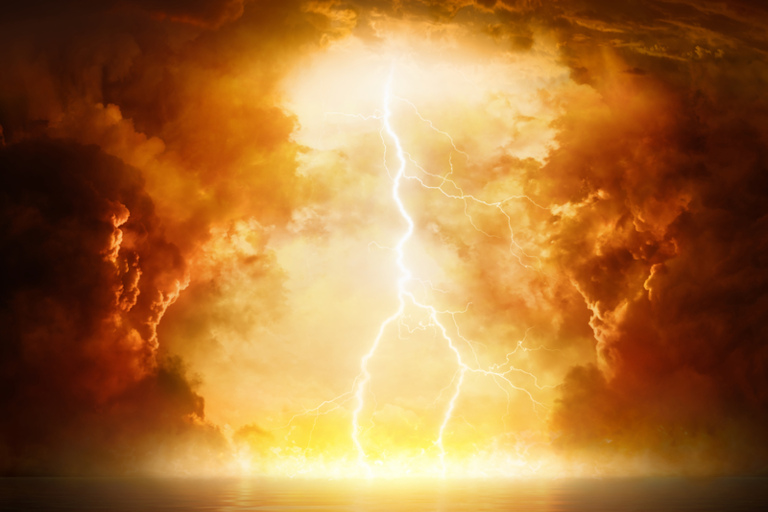 Most near death experiences (NDEs) have a positive atmosphere, but for Howard Storm, an atheist art professor, his NDE was all dark and hellish. (Image: Ig0rzh via Dreamstime)

Most near-death experiences (NDEs) have a positive atmosphere. People walk toward a light, filled with peace and calm, or in the guiding presence of a deity or a loved one. But for Howard Storm, an atheist art professor, his NDE was all dark and hellish.

His near-death experience in 1985 transformed his life, and today he preaches the greatest message he got from his experience: Love.

“I believed that science was the truth and the only truth, and everything else was not only nonsense, but silly and ridiculous, delusional,” Rev. Howard Storm says.

Howard Storm was an art professor at Northern Kentucky University by the time he was 27. He believes he was “a know-it-all professor” before his near-death experience.

Howard Storm’s atheism ended one fateful day on July 1, 1985. On the last day, after a three-week art tour in Europe, he returned to his hotel room in Paris after visiting Delacroix’s home and studio. In his room, he collapsed in front of his wife and one of his students.

As he was lying there screaming in pain, his wife called the doctor. He had a perforation of the duodenum, and the doctors said he needed surgery immediately. But he found out doctors only work for five days in France. “French doctors do seven surgeries a week, and after they do the seven surgeries, they take the weekend off,” Howard Storm recalls.

He needed surgery in one hour, but there were no doctors to attend to him. Fortunately, he didn’t die, but he was in absolute pain. After hours in agony without pain medication, he was sure he would die. So he said his farewells to his wife and lost consciousness.

After drifting to darkness, Howard Storm had an out-of-body experience (OBE). He was there looking at himself, lying on the bed with his wife sitting beside him. His pain was gone, but when he tried to speak to his wife, she didn’t seem to notice or hear him.

Outside, he heard a voice calling him in English (without a French accent). “Come out here,” they urged, “don’t you want to get better?”

Howard Storm stepped outside his room into the hall. The area seemed to be hazy, and he was filled with anxiety. He says his senses were more heightened than usual as he followed the voices. The fog thickened the further they went, and it became darker.

His fear and hopelessness grew as he went deeper, and he told his guides he wouldn’t go any further. That’s when they began to push and shove him, and a fight ensued. As he started fighting, more and more joined in, and he was outnumbered.

They started tearing off his flesh, and he came to the horrible realization that they were eating him alive. “We had a big fight and the fight turned into them annihilating me, which they did slowly and with much relish,” he remembers.

Howard says while lying there in a wretched state, he tried to remember prayers he had memorized as a child. Another voice in his head was trying to silence him, but the voice urging him to pray eventually won.

At last, he managed to blurt out a prayer he remembered: “the Lord is my shepherd, I shall not want…”

But when the people around him heard his prayer, they told him there was no God, and nobody could hear him. However, they said this while backing away from him. Eventually, they retreated away, and he could no longer hear their curses.

Once they retreated, Howard Storm saw a distant light. It became brighter and brighter. He was covered in its beautiful glow, and from the light, he saw Jesus. “His arms reached around and touched me, and everything healed up and came back together. He filled me with love I never knew existed.”

From that day forward, the avowed atheist dedicated his life to sharing the love of God.

Today, Howard Storm continues to understand more about his experience. He says he knows he isn’t perfect, but he strives to spread the message.

“The other thing was, I thought after that experience I was going to be a saint, never have temptations, never sin, and never have any faults. To my horror, I found that wasn’t true at all.”

“I am constantly trying to refine my understanding, and most importantly, my ability to articulate it,” he said.

Through his near-death experience, seminars, and books, Howard Storm hopes to spread the universal message of love.