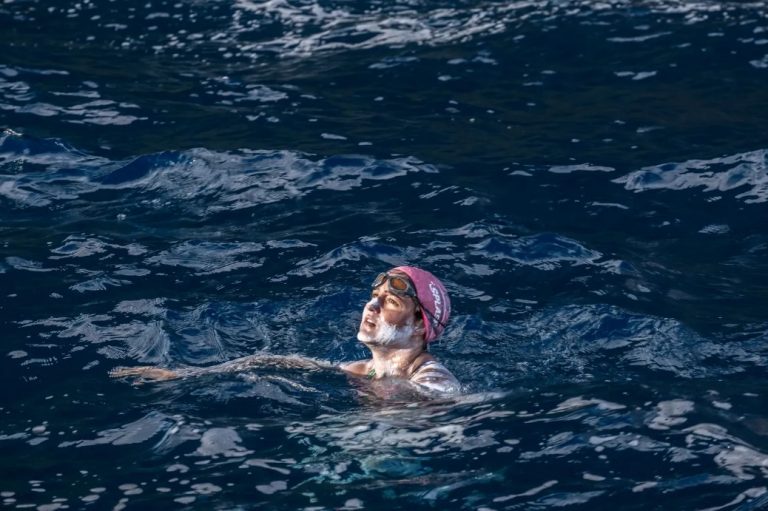 Lauren Tischendorf was the first woman to swim the waters around the shark-infested Lord Howe Island. (Image: laurentischendorf.com)

The past decade has seen long-distance women swimmers achieve extraordinary feats. For example, Lauren Tischendorf was the first woman to swim the waters around the shark-infested Lord Howe Island.

Female swimmers in recent times have even outpaced their male counterparts, breaking world records and benefiting others with their achievements.

In April 2021, Lauren Tischendorf swam the shark-infested Lord Howe Island, Australia, in a 13-hour, 55-minute journey. It’s a swimming journey of sheer will, ambition, and living her dream against extreme odds.

Lauren Tischendorf, a special education teacher, moved to Sydney 10 years ago. The 39-year-old’s achievements are a testament to courage and endurance. Also, her 20-mile swim through grueling shark-infested waters shows peak mental and physical fitness.

Lauren Tischendorf has always loved active sports. She said everyone in her neighborhood had a swimming pool for as long as she could remember. She remembers how she used to jump over fences to swim. As a kid, back in South Africa, she also did synchronized swimming, water polo, and a lot of squad swimming as a teenager.

She also remembers that her first dream of playing tennis didn’t go as planned because her male competitors didn’t like it when she beat them. That’s when she started swimming in the ocean.

She fell in love with ocean swimming because there was no time to speak, and there were people of all genders and ages.

After spending time on the Eastern Sydney beaches for over 10 years, she has explored open water swimming much more. She believes there is nothing like a sunrise swim at Bondi Beach, where she swims every day, sometimes twice a day.

How did Lauren Tischendorf get the idea to swim around the 35-km Lord Howe Island?

Lauren Tischendorf has been swimming 35 km weekly for over three years. She remembers in mid-2020, before going on a group swim, she received an off-hand remark about not being as good as the male swimmers. However, she went on to beat them in the swim.

That victory turned on her desire to do more, to push her boundaries. She believes no woman should be told they are not good or strong enough when doing something they love. As long as you know your abilities, nobody should decide what you can achieve or discourage you from going for it.

Swimming 35 kilometers in unpredictable conditions is no easy feat. Nevertheless, Lauren Tischendorf wanted to be in top physical and mental shape, and between January to April 2021, she would swim 5-6 hours daily. She was already swimming 35-40 kilometers for about three years before her historic swim.

“I did four or five pool (about 5 km) sessions per week, and four to five ocean swims a week (of varying distances)… From January to April, I increased my Saturday squad sessions to 3-,4-,5-, and 6-hour swims.”

Although she didn’t complete her swim before dusk (as she had planned), Lauren still achieved her dream despite discouragement from naysayers. Locals had even placed bets on whether she would quit and if she would finish before nightfall.

Accompanied by two auxiliary boats, Lauren encountered sharks, currents, and unforeseen circumstances — sometimes, she would be swimming backward. She also had a close shave with a tiger shark.

“I knew there were going to be sharks. There is one section of the island that’s a shark nursery. This was also where the water and the wind were not letting me move. I counted the sharks I saw, and I got up to 12. I stopped counting then.”

Despite the naysayers and bettors, most island locals were behind her celebrating her achievement.

“Many on the island had bets on my time. But the great cheer and support that came through after the swim were incredible, so too after the swim. It was so heartwarming, and I am eternally grateful for their enthusiasm and support in my adventure,” Lauren Tischendorf said.