A Mysterious Old Man Who Changed the Weather With Music 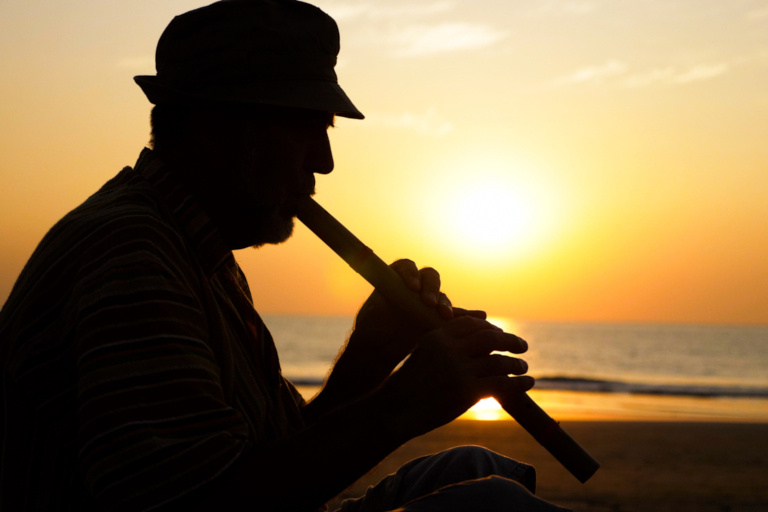 Li Zimou thought he was the most skilled flute player in the world until he met a mysterious old man. (Image: Alexander Egizarov via Dreamstime)

Li Zimou, who lived during the Tang Dynasty, was extremely skilled at playing the flute. The music he played could bring silence to the noisy, crowded streets as people desired to immerse themselves in it. Li Zimou thought no one in the world could match him until he met a mysterious old man. The old man took out a white jade flute, but Li Zimou could make no sound with it no matter how hard he tried. The older man, however, used it to produce a wonderful melody that changed the weather.

Li Zimou was the Emperor’s grandson, very personable, elegant, talented, tasteful, fond of music, and proficient in melody. His flute-playing skills were superb and unmatched anywhere in the state.

In those days, there was a custom in the area of Jingmen for people to hang colorful lanterns along the riverside on the 15th day of the first lunar month. So the two sides of the river were full of tourists who came to see the scenery along with vendors and their carts.

Coincidentally, Li Zimou traveled to Jingmen at that time of year and encountered the hustling scene. He told his friend who traveled with him: “If I play a piece of flute music, it will silence thousands of people.” His friend thought so as well. So Li Zimou went into a building, went up to the second floor, and stood by an open window to start a solo.

As the clear and melodious sound of his flute reached people’s ears, all noise stopped. Pedestrians stopped walking, people sitting in chairs stood up unconsciously, and everyone immersed themselves in his flute’s melody. After the song ended, people regained their composure, and the street resumed bustling with noise and activities again.

Li Zimou was so confident about his talents that he was entirely at ease.

The older man’s music made the weather change

Suddenly, the sound of singing could be heard from downstairs. It was an old man with grey hair and a beard who had left his boat on the river and walked up to them. He had a bright, resounding voice that made Li Zimou and others rush to greet him.

The senior person spoke to Li Zimou directly: “Was the person who just played the flute an Emperor’s grandson? Your playing skills are fantastic, but your instrument seems too ordinary.” After hearing it, Li Zimou said confusedly: “The late emperor gave the flute to me. I don’t know what the things that gods and ghosts possess look like, but I know it is a treasure among all musical instruments. I have seen more than ten thousand instruments, and nothing can compare. But you said it was mediocre. Could you give me a reason?”

The old man said calmly: “I have been playing flutes since childhood, and as a result, I don’t feel tired even when I am aged.” Then, he asked Li Zimou to give him the flute, and Li Zimou handed it to him at once. But, unexpectedly, as soon as the grey-haired man made a sound on it, it burst. All the people were astonished and wondered who he was. Li Zimou immediately kowtowed to him, hoping to see his flutes.

Upon hearing the request, the old man told Li Zimou that he would be unable to make a sound on any of his flutes. But he also asked the boy beside him to fetch a white jade flute from his boat and to hand it to Li Zimou. Just as he said, Li Zimou couldn’t make a sound even after he tried his best, which made him admire the old man more.

Then, the old man took the white jade flute from Li Zimou. He played it softly, but the tune made people present feel a chill. The music he played was straightforward and exalted. Its lingering sound made people feel refreshed. Before the song ended, the wind and the clouds changed gradually. In no time, the clouds dissipated, and the sky became extremely clear. After people recovered from the beautiful music, they saw that the old man had vanished.