The Mystery of Go, the Strategy Game 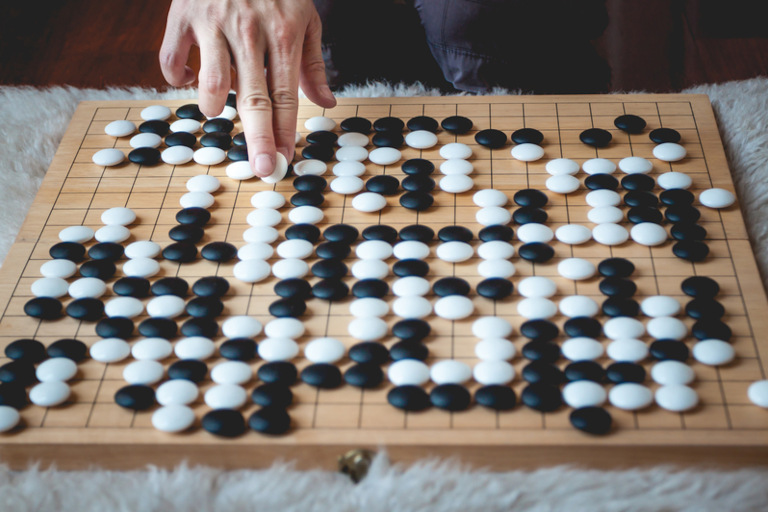 The game of Go looks simple but it contains profound wisdom. (Image: Sittichan Ausavakornthanarat via Dreamstime)

In the palace, Emperor Taizong of the Song Dynasty played the game of Go with Jia Yuan, one of his officials. Playing Go with the Emperor was always problematic, as winning or losing was quite a significant matter. Therefore, playing the game required much care and attention.

Taizong always gave Jia three moves when playing Go, while Jia always lost one stone at the end of the game. Why was that? Jia thought if he lost too much and the Emperor found him deliberately losing the game, he would be in big trouble and could even be accused of the crime of cheating the Emperor. But if he lost one or two stones, the Emperor would be happy and could show his skills were not so bad.

Eventually, Taizong felt something wrong. So, once, he told Jia before the game: “I will flog you if you lose this game again.” It turned out the game was a tie. Taizong was angry but also found it funny, so he said: “You are so deceitful. Let’s play one more round. I will give you an official scarlet uniform if you win, but I will throw you into a mud pit if you lose.”

At the end of the game, it was also a tie. The Emperor said ruthlessly: “I have given you a move at the outset. But now it’s a draw, meaning you lose the game. Attendants! Come throw Jia Yuan into the mud pit.” Jia immediately exclaimed: “Majesty! A captured stone is in my hand, you didn’t count it.” Taizong laughed loudly and bestowed on Jia an official crimson uniform.

Taizong also realized that while his skill level could have been better, it was pretty high. But Jia could control the game at will, not only winning and losing as he wished, but even controlling the extent to which he won or lost. So his skill level was superb and admirable.

Speaking of Go, it looks simple, but it contains profound wisdom. Through competition between black and white stones on a crisscrossing board, Go combines art, the principles of the Book of Changes, tactics, and knowledge. No wonder it has been deeply loved by emperors, generals, ministers, scholars, and civilians in all dynasties.

While the Taoist section generally seeks a taste for life and a moral realm of cultivation, takes victory and defeat as a commonplace event in military affairs, detaches from it, and naturally gains joy.

However, no matter which faction you are in, there is a “way to win.”

The dream about Go

Here is an exciting historical story of a dream about Go. In the Song Dynasty, the Hu family’s grandfather and his son loved the game Go, and players came to Hu’s home daily to discuss skills and strategy.

One night, the son’s wife had a strange dream and suddenly woke up. People asked her: “What’s going on? Are you alright?” The lady said: “I had a dream that I swallowed a captured stone.”

Everybody laughed and thought it was nothing, rationalizing that what one thought about during the day would be dreamed of at night. Many players talked about Go in the house daily, so they thought it was no wonder she had such a dream.

Soon, the lady gave birth to a son named Hu Zhuoming. When Zhuoming was 7 or 8 years old, he saw his grandfather playing Go with others. He suddenly pointed at the board and said: “Grandpa! This move you just made was wrong.” His grandpa ignored him and continued to play his game.

His grandpa lost. Then, feeling unhappy, he angrily said: “Boy! How did you know it?” Meanwhile, his grandpa pushed the board and the stones to him, indicating that he should try to play a game against the same opponent if he thought he could do better. Zhuoming was young, but he had no fear of competition, calmly playing the game with the opponent.

As a result, he won it. His grandfather was so surprised that he also played with Zhuoming. After playing for a few days, he could match his grandpa. When Zhuoming was around 12 years old, many players came to challenge him, but all were defeated. Soon, Zhuoming was well-known for his skill.

Soon, the family realized that the dream of Zhuoming’s mother indicated Zhuoming was reincarnated from a stone that knew how to play Go.