How to Tell if Jade Is Real in 5 Easy Steps 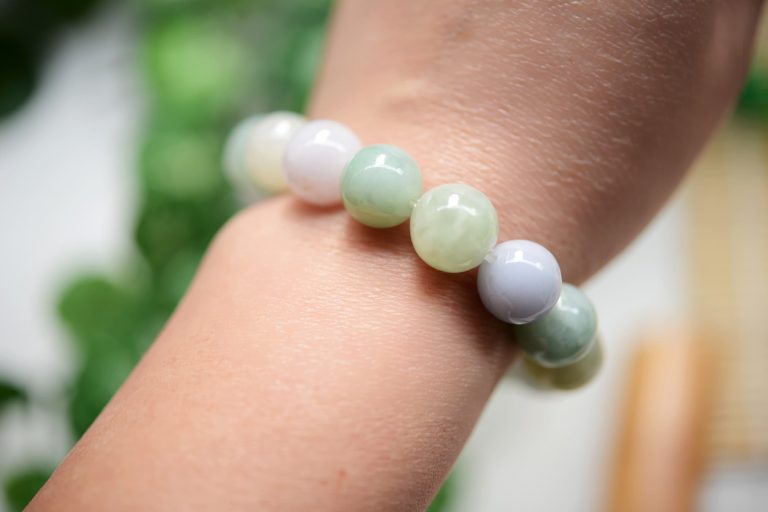 Jade is among the most prized gemstones in the world. (Image: Mengtianhan via Dreamstime)

Jade is among the most prized gemstones in the world, and in some cultures, it’s more than just an ornament. But it’s difficult to tell if jade is real.

For thousands of years, it’s been sought for its properties, appearance, and religious, spiritual or health benefits.

Many gemstones, from gold to diamonds, can be faked in the modern world. Unfortunately, faking and misrepresenting the authenticity of jewelry does not make any exception with Jade. Fake jade is not rare due to its popularity and high prices. The good thing is that it is challenging to imitate something to perfection.

So, knowing how to differentiate genuine jade from fake jade to avoid being ripped off is essential.

What are the Two types of jade?

Before you know the difference between real and fake jade, you should know that there are two types of jade: jadeite and nephrite. These two types of jade are so different that they are almost like two distinct minerals.

Jadeite is rarer, harder, and denser than nephrite, and it’s mainly mined in northern Myanmar. And because it’s less common, it’s more expensive. It also comes in a broader range of green, and imperial green jade is the most expensive.

On the other hand, nephrite comes in a broader range of colors like green, white, or yellow. It’s more common than jadeite, making it more affordable.

Remember, there’s nothing wrong with buying nephrite, but some unscrupulous retailers may try to pass off nephrite as the more expensive jadeite.

Just be aware of the differences so you don’t get charged more then you should.

So, how do you tell if jade is real or fake?

How to tell if jade is real

The light test: look for irregularities

The light test is arguably the easiest way to test your jade. Authentic jade has granular, fibrous, or felt-like fibers intertwined within its structure. You can see these marks by placing your stone under a bright light and watching out for color consistency. The color should be consistent throughout your gem, with some minor variations.

Fake jade usually has patterns that are too perfect or uniform. Chrysoprase is the most common compound used to imitate jade. But, unlike jade, chrysoprase won’t have granular or felt-like marks.

You can use a loupe to magnify your stone and get a better look. If the stone has uniform patterns or is layered, it’s most likely fake.

Flaws in most gemstones are generally considered a disadvantage. But when it comes to jade, flaws show that the stone is genuine.

As mentioned, the vein-like patterns show a real gem because they are common in natural jade even after polishing.

But bubbles or different colors mean it’s fake jade made from glass or other imitations.

Also, genuine jade is translucent with a smooth texture.

Jade comes in many colors, but these colors are usually vivid and striking. You may find opaque or dull jade, but it is inexpensive.

Most jade collectors swear by this test. It’s a simple way to detect whether your jade is fake. Real jade is tough, and you can’t scratch it with regular metals used at home.

So, you shouldn’t be able to leave a lasting mark on your stone using a steel pin, scissor, or knife.

On the Mohs scale, jade has a hardness of 6 to 7, while steel ranks at 5. It means jade is harder than steel and should not be scratched by it.

Remember, never do this test at any store without express permission from the owner. And even when doing this at home, take great care to avoid damaging the setting of your jade.

Nephrite is not as hard as jadeite, and the scratch test may damage it.

Also, the gem may not be natural jade, but it may still be a valuable imitation like prehnite or green quartz.

Jade has a relatively high density, especially compared to its popular imitations.

Nephrite has a density of around 3.3, while jadeite is about 3.0.

First, you can use the toss-in-the-air test to feel its density. (But please don’t randomly do this in a jewelry store, where you may drop the bracelet, or stone by accident)

It’s simple; throw the stone in the air and catch it. Original jade should feel heavier upon catching it.

Other stones or jade imitations, such as glass, are lighter.

Secondly, you may require another piece of authentic jade. Tap this original piece against the one you are testing.

Fake jade will probably sound like two plastic beads tapping against each other.

Thirdly, you can do the density calculations if you have the instruments. But you can’t do this at the store.

Authentic jade feels cool to the touch, and it takes some time to warm up. If held in your palms, it will take longer to warm up and cool down quickly when set aside.

You can take it in your palm, let it warm, and then place it aside for several seconds. If you put it back on your palm, real jade should not be warm.

However, this test is subjective because what feels warm to you may be cold to another person.

Jadeite and nephrite also come in four different grades depending on the technique used to stabilize them (Type A to type D). It’s important to understand these grades to know the value of the jade.

As mentioned, there’s nothing wrong with owning imitation jade as long as you know what you are buying.

Also, the mentioned ways to detect fake jade are not foolproof; the only surefire way is to take it to a gemologist.

It would help if you also bought your gemstone from a reputable seller with a certificate of authenticity.

Two types of very similar-looking stones are both considered jade. However, the price value of jade is distinguished by one of two materials it is made of.

One is Nephrite, and the other is Jadeite. Jadeite is the more expensive one of the two stones.

Unfortunately, many dealers try to cash in on customers’ need for more knowledge about distinguishing the two distinctly different stones from one another.

If you have read the article till here, you belong to the few people who can distinguish cheap Jade from expensive Jade.