The Royal Chapel of Versailles: The Victory Monument of Louis XIV 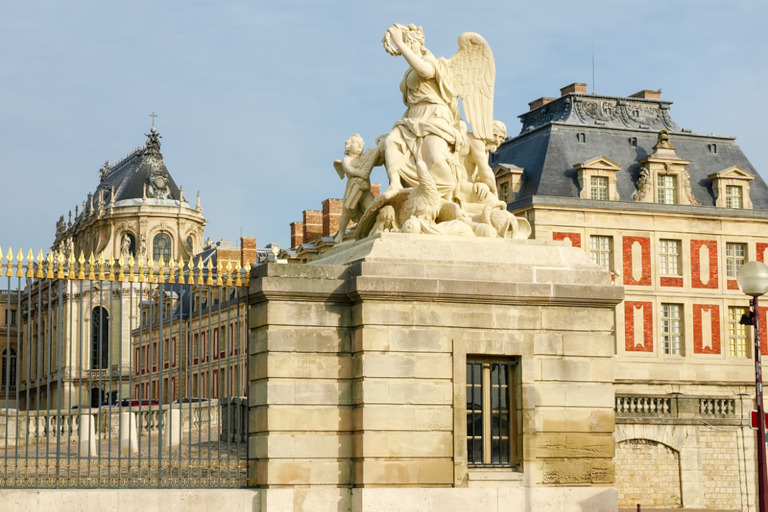 The Royal Chapel of Versailles symbolized honor and power for the successful ruler, Louis XIV. The Chapel, along with the Hall of Mirrors, is regarded as Louis XIV’s spiritual legacy and is one of the gems of the Palace of Versailles.

The Palace of Versailles seems like a trophy even to the untrained eye. It was designed by Jules Hardouin-Mansart (1699 -1710) under the supervision of Robert de Cotte. And even after centuries, the Royal Chapel of Versailles still stands today and is a religious architectural gem. Historians consider it a fantastic demonstration of that period’s arts.

This article will journey through the hidden glory of Louis XIV’s victory monument, the Royal Chapel of Versailles.

The Palace of Versailles’ grand design

Arriving from the Place d’Armes, the chapel’s sleek silhouette is hard to miss. The 40-meter-high roof ridge and a stone façade feature large windows that illuminate the inside with immense amounts of light, especially during the golden hours of the day. The Royal Chapel of Versailles towers several dozen meters above the surrounding structures. It was the fifth — and final — chapel built in the Palace following the reign of Louis XIII. The design for this architectural masterpiece was presented to King Louis XIV by Jules Hardouin-Mansart in 1699.

A symbol of cosmic order at Versailles

It’s almost as if Louis XIV, also known as the Sun King, meant to evoke the concept of the divine right of the monarchy with this majestic architectural feat. It deserves noting that having a spiritual place erected higher than his own Palace, it symbolized his devotion and reverence to the great Order that governs all things, celestial and human. Could this architectural allegory also have been meant to remind him and all who came after him that earthly power is temporal?

Despite breaking the Palace’s horizontal line of symmetry, the Royal Chapel of Versailles is the most accomplished representation of Louis XIV’s spectacular taste and style. The King’s architect, Jules Hardouin-Mansart, who gave spark to the Chapel of Versailles, also created the Hall of Mirrors toward the end of the Sun King’s reign.

From 1710 through 1789, the chapel at the Palace of Versailles was the showplace for religious festivities, like the kings’ communion, Order of the Holy Spirit rituals, and the baptisms and marriages of countless princes and princesses of the realm.

The layout of the Royal Chapel of Versailles

The Royal Chapel of Versailles was suggested to be erected in five different locations before being built where it stands today. Even though the project was initiated in 1682, the current location was not selected until 1687. The Royal Chapel of Versailles has undergone a few renovations. The original roof lantern was removed in 1765 to reduce the load on the roof timbers.

The Royal Chapel of Versailles is a complete representation of Louis the XIV and his architect’s ambitions — to provide Versailles with a chapel worthy of Europe’s largest palace. This helps to explain why it took five years to reach a consensus on its final location within the Palace.

Mansart’s goal was twofold — to preserve the architectural history of French royal chapels and also to give the structure a highly modern aspect, in keeping with Versailles’ “grand royal style.”

Many think the structure bears similarities to the Sainte-Chapelle, which Saint-Louis erected on Île de la Cité in the 1240s. This is mainly owing to its vast windows, which allow in natural light, as well as its height (40 meters) on a squat and streamlined foundation (24 meters wide and 42 meters long), which is made feasible by its inner colonnade. Inside, an unbroken ceiling boldly displays frescoes, while free-standing columns let in abundant light from big panes of transparent glass — a luxury at the time.

Hardouin-Mansart died in 1708, nine years after the construction began. Robert de Cotte, his brother-in-law, took up the project, which was finished the following year. The finished Royal Chapel of Versailles was blessed on June 5, 1710, by Cardinal de Noailles, Archbishop of Paris, who dedicated what many consider Louis XIV’s spiritual legacy.

Music was an inherent component of the building, beginning with the ceremony to bless the Royal Chapel of Versailles, during which François Couperin inaugurated the organ. Clicquot designed this instrument, which is oddly placed above the altar and is adorned with a relief of King David. As a result, it was facing the gallery, where the royal family sat during mass.

The chapel continues to hold performances that feature a diverse repertoire of sacred and secular music from that era and today, allowing the acoustics of this remarkable musical space to reverberate more than 300 years after its creation.