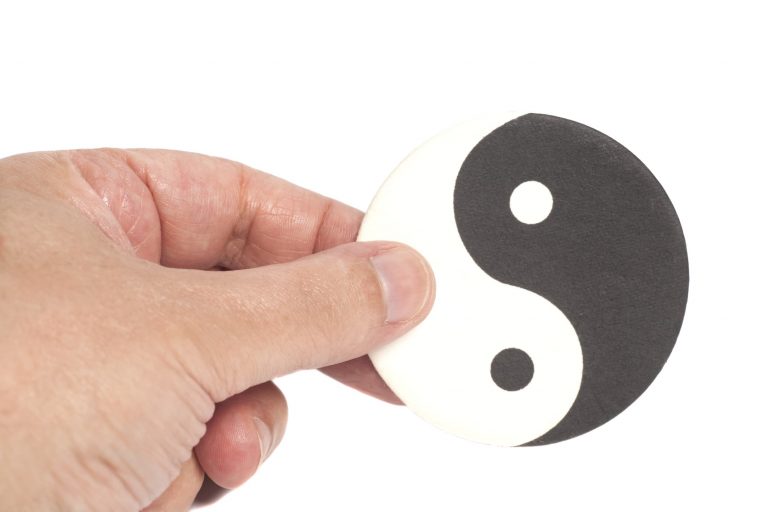 Yin and Yang are entirely intertwined, and one can't exist without the other. However, Stagnation of one brings imbalance to the other. (Image: Kevkhiev Yury via Dreamstime)

The yin and yang concept is the most known concept of Taoism. You’ve probably heard of or seen the yin-yang symbol in multiple places, but do you know its deeper meaning?

Once you understand this ancient Taoist philosophy, you start to notice it in endless areas and aspects of life.

Integrating yin and yang in your daily life can significantly benefit you on mental, physical, emotional, and spiritual levels.

The philosophy of yin and yang is best represented by its symbol (Taijitu). This symbol is a circle divided by a curving line into two equal parts.

The yin part is black, while the yang one is white. And the more modern yin-yang symbol has an additional black and white dot to show the possibility of inner transformation because each half always carries a part of the other.

In short, yin-yang is a concept of duality.

The yin-yang philosophy came from observing the very true nature of our Universe.

Everything has two aspects; darkness has light, sickness has health, and nothing is purely good or purely evil.

Yin and yang form each other, balance each other, and transform into each other; they are the composition of the physical world.

Yin and yang are entirely intertwined and necessary for each other. It means one can’t exist without the other.

When life achieves the appropriate yin-yang balance, it flows steadily, maintaining and enhancing a good state of mental and physical health.

But most people view yin and yang as two separate elements. And it’s easy to prefer one over the other; exercise over rest, flings over long-term relationships, or overworking over relaxation.

However, you must accept and embrace both to access the harmony and power of the yin-yang principle.

“When people see things as beautiful,

When people see things as good,

Being and non-being produce each other,

Difficult and easy complement each other,

Long and short define each other,

High and low oppose each other,

Yin and yang in everyday life

As mentioned, yin and yang are opposing but complementary forces. Yin leans toward femininity, mystery, the moon, darkness, softness, and more.

On the other hand, yang represents themes like masculinity, clarity, the sun, light, and action, among many others.

So how can the yin-yang philosophy help you in the unpredictable and fast-paced world?

You can use the yin-yang philosophy to promote personal health and wellness. It forms the philosophical framework for Chinese medicine. It is discussed in The Yellow Emperor’s Classic of Internal Medicine — an influential reference text for Chinese medicine practitioners for more than two thousand years.

In Chinese medicine, certain illnesses are caused by certain foods and lifestyles, or are more prevalent in different seasons, corresponding with yin-yang imbalances in your body.

Exercise is excellent for your health. But it’s counterproductive when you sacrifice rest to squeeze in a workout or go straight to heavy lifting after a whole day at work.

Try introducing movement into your daily routine because the yang approach (unending action and expansion) is a recipe for injury. Also, listen to your body before your exercise.

The modern world favors the yang side of the yin-yang balance. You are encouraged to be more productive, push your limits, increase your output, or earn more. But you probably miss the time needed to rest, heal, and nourish your body.

When this happens constantly, you will probably get “yin deficiency,” and symptoms like frustration, muscle tightness, sleep issues, and anxiety appear.

It’s important to schedule activities that are more yin in nature into your life. Make time for rest, breathing, eating, meditation, and above all, for gratitude. Be grateful for something before sleep, even when things aren’t going your way.

The yin-yang philosophy shows balance is the key to wellness, health, and prosperity.

The considerations of yin and yang in your everyday life are endless because things in life have two opposing but complementary forces.

By embracing yin and yang wisdom, you become more skillful in navigating through your experiences in every moment.