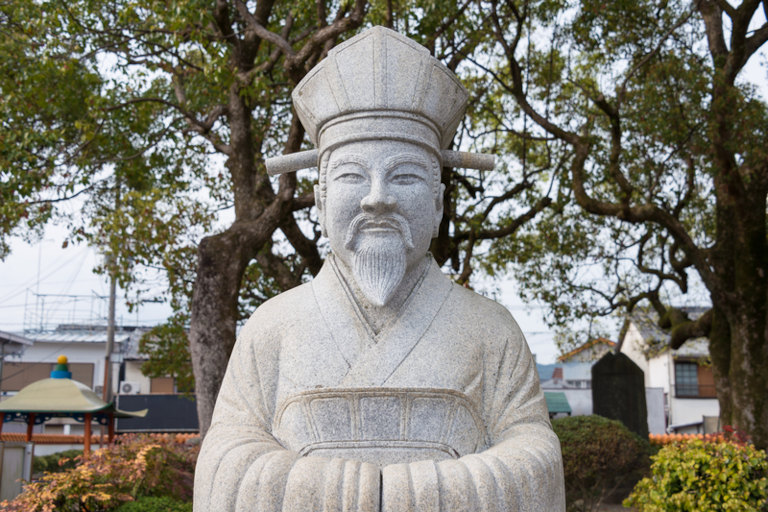 Xu Fu, Chinese alchemist and explorer, is one of three famous Chinese people with shrines in Japan. (Image: Beibaoke1 via Dreamstime)

Traditionally, Japanese people have great respect for those who are capable or have made outstanding contributions. In different regions and countries, people express their respect toward these people in different ways. However, there are some similarities. For example, statues or portraits are made of those people and put in public places, shrines, or other buildings for people to worship or pay their respect.

Today, we are going to talk about a few special figures from China enshrined by the Japanese people, something quite unusual considering the very sensitive relationship between the two countries.

Japan aggressively invaded China a few decades ago. And throughout history from ancient times, there have been constant conflicts between the two nations. Therefore, the Chinese people often view the Japanese with some hostility and suspicion and vice versa.

It is therefore quite unusual that in the Yasukuni Shrine of Japan three historic Chinese figures are enshrined. It is even more usual given that shrines are a very sacred and important place for the Japanese. So which Chinese are so revered in Japan?

The first person enshrined was Xu Fu. Around 200 BC, Emperor Qin Shihuang was obsessed with alchemy. In pursuit of immortality, Qin Shihuang sent Xu Fu, who was an alchemist, along with three thousand boys and girls to the sea in search of medicinal materials for refining the elixir that can prolong life. But Xu Fu never returned. It was said that Xu Fu landed in Japan and made a lot of contributions to the local Japanese people. At the time, many technologies available in China were not known in Japan.

The second Chinese figure enshrined is Chiang Kai-shek. During World War II, the Japanese committed heinous war crimes in China. After their defeat, according to normal practice, Japan should have made massive compensation to China. But Japan was devastated after the war. As the leader of the National Government at the time, Chiang Kai-shek did not demand compensation, and he ensured the safe return of the 2 million Japanese soldiers and civilians who had surrendered. Therefore, the Japanese were very grateful for Chiang Kai-shek’s virtue of not seeking revenge.

The third person is Lin Jingyin. A lot of people may not be familiar with him. Lin Jingyin lived in the Yuan Dynasty and he traveled to Japan in 1350 with his Japanese friend Longshan. At the time, Japan was far inferior to China in terms of food production technology. For example, their desserts were mostly rice cakes, which were hard and crisp, as they did not know about using yeast in baking. Therefore, Lin Jingyin introduced to the local Japanese the skills he mastered in China to make soft and tasty steamed buns, which became very popular among the Japanese people. Lin Jingyin was enshrined by the Japanese people for this reason.