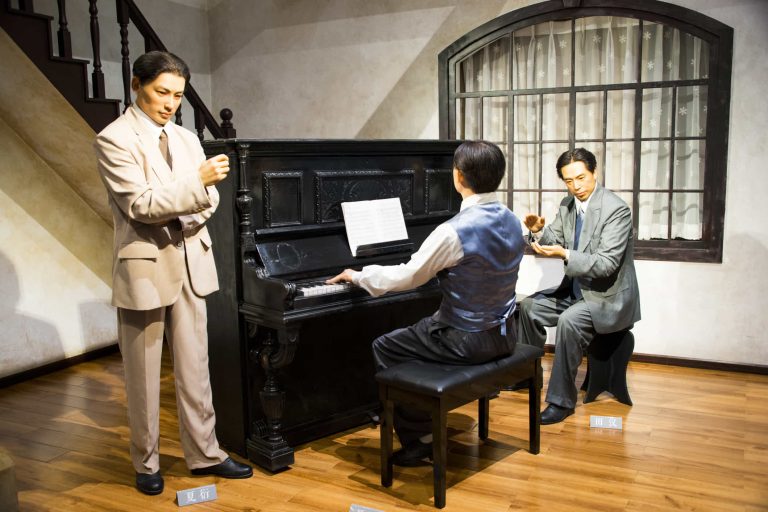 China’s now-beloved national anthem March of the Volunteers was written in 1931 by lyricist Tian Han. But many do not realize the history behind the anthem, or that his greatest fame only came posthumously. In the latter part of his life, Tian Han experienced first-hand the brutality of the Communist Party — the Party that he once held in such high esteem and had even spent his youth advocating for. In fact, his personal experience reflects the sorrow of many Chinese artists of his generation.

Tian Han was born in 1898 in Hunan Province, China. He studied in Japan where he majored in education, but during this time, he discovered that he also had an interest in drama. After returning to China in 1921, he established the Nanguo Movie Club as well as the Nanguo Art Academy, with the former focusing on the promotion of modern Chinese movies, and the latter on writing screenplays and creating films.

During that time, Tian Han also wrote poems and lyrics for a variety of popular songs, including A Song for Four Seasons and A Singing Girl at the End of the World.

A talented young man, Tian Han joined the Chinese Leftist Dramatist Union in 1931, followed by the Chinese Communist Party in 1932. He became active in underground communist art circles in Shanghai, and in 1931, under the directive of the Dramatist Union, Tian Han joined other underground communist artists in traveling abroad to influence areas controlled by the opposing Kuomintang Party. Members played communist-themed movies to workers, students, and farmers, and wrote so-called “advanced screenplays” in an effort to promote communism.

Armed with pro-communist, anti-Kuomintang propaganda, the leftist writers and artists were very active and quite persuasive with their messaging. This was amplified during the early stages of the China-Japan war in 1937, when communists accused the Kuomintang Party of not resisting the Japanese army. This provoked the Chinese people’s anger against the Kuomintang Party, and this false communist narrative is still cited to this day on the web pages of the Chinese Central United Front Work Department.

In early 1935, while Tian Han was modifying the anti-Japanese movie Sons and Daughters of the Wind, he wrote the lyrics for a theme song entitled March of the Volunteers, and the accompanying music was later written by musician Nie Er. During the Chinese People’s Political Consultative Meeting on September 27, 1949, the song was officially named the country’s acting national anthem.

After the Chinese Communist Party took power, Tian Han was immediately viewed as a shining star. He held important positions, serving as Director of the Drama Improvement Bureau of the Ministry of Culture, Director of the Bureau of Arts Administration, and served two terms as a member of the National People’s Congress.

Loyalty to the Party proves tragic

In 1956, Mao Zedong launched a movement he dubbed “a hundred flowers bloom, a hundred schools of thought voice their minds,” where people from different walks of life, primarily intellectuals, voiced their complaints or shared their advice on how to make things better. Tian Han wrote his own articles, expressing his concern for the misfortunes of some people within the art circle. Little did he know, any opposing views to the Party narrative were not to be tolerated.

While Tian Han escaped the anti-rightist movement in 1957, he was later picked up by the China Propaganda Department and detained for several days in 1959. Although he had fallen from his high-ranking position, in his diary dated June 9, 1965, he wrote: “I should always dare to find fault with myself, not to mention that I do have many faults.”

Although he tried to show his loyalty to the Communist Party, his situation became worse once the Cultural Revolution started in 1966. During this time, Tian Han was sharply criticized for his newly written Peking opera called Xie Yaohuan. His play’s theme was accused of “pleading for the common people” and was “using the past to satirize the present” and being “anti-Party, anti-socialism and anti-people.” Due to these serious and false accusations, his own son Tain Dawei, in an attempt to disassociate himself from his father, posted a large-print poster labeling Tian Han a traitor.

Reputation ruined and deprived of decency

Tian Han got a first-hand understanding of just how harshly the Communist Party treats those whom they no longer find useful. One day during his detention, while eating in the dining hall, he choked, throwing up a bone that was too hard for him to swallow. Instead of being offered help, Tian Han was harshly criticized and reprimanded, and ordered to eat whatever he’d thrown up.

On December 4, 1966, Tian Han was arrested by the Beijing Garrison Command and secretly confined. Two days later, the People’s Daily newspaper published three articles calling Tian Han a daring vanguard who was “anti-Party, anti-socialism, and anti-Mao Zedong.” As a result, the acting national anthem March of the Volunteers was stripped of its title, and would not be heard again for many years.

In July 1967, Tian Han was sent to the Beijing 301 Hospital under the fictitious name Lee Wu for treatment of heart disease and diabetes. While sick and hospitalized, Tian Han was put on trial at the same time.

In December 1968, as Tian Han lapsed in and out of consciousness, he repeatedly called for his mother, whom he missed very much, muttering: “Please, let me go home and see my mom, please.” But it was not to be.

On December 10, 1968, Tian Han died in the hospital at the age of 70. None of his family or friends were by his side. After his death, someone in the army coldly related the news to his son: “Tian Han is dead. His crime is heinous.” His son dared not even take back the ashes of his father.

‘March of the Volunteers’ reinstated as the national anthem

Years after his death, in 1979, a strange turn of events took place: Tian Han was found innocent and vindicated of his accused crimes. In December 1982, the National People’s Congress declared March of the Volunteers to be the formal national anthem of China, and it was incorporated into the national constitution in 2004.

The ups and downs of Tian Han’s life are both miserable and absurd. They go far beyond any lyrics he had ever written or stories he’d ever told, and expose yet another dark side of the Chinese Communist Party.