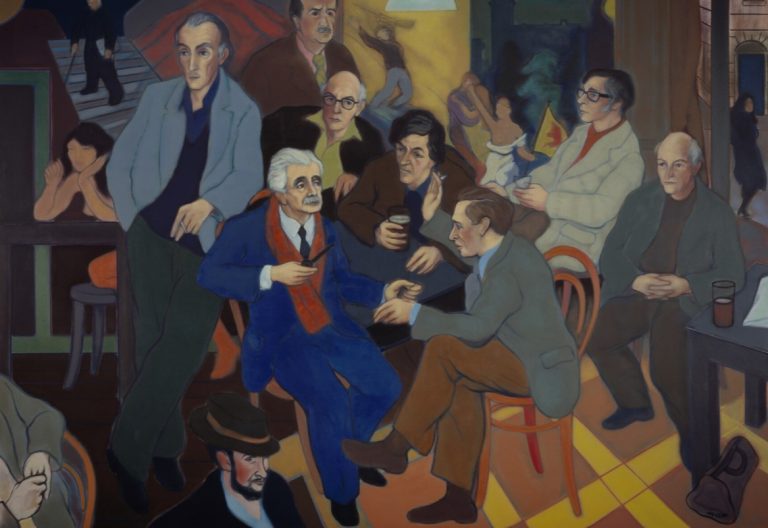 The Landmarks: Poets, Portraits, and Landscapes of Modern Scotland exhibition was held at the Lillie Art Gallery in 2018. The exhibition was a significant collaborative effort by Scottish painters Alexander (Sandy) Moffat, Ruth Nicol, and poet Alan Riach.

But the exhibition sprung yet another surprise — the walls also showcased poems and accounts by poet Alan Riach about his encounters with the poets painted by Sandy Moffat.

Completed in 1980, Poets’ Pub is one of the most significant composite paintings in Scotland and Europe. Moffat’s Poets’ Pub depicted an imaginary gathering of Scottish poets in a fictional pub in 1960’s Edinburgh.

In this painting, Hugh McDiarmid is the central figure, the father of them all. McDiarmid addresses the other six poets, pipe in hand and a cherry-red scarf around his neck. He takes center stage because publishing The Drunk Man Looks at the Thistle in 1926 changed Scottish poetry.

The other six poets include Iain Chrichton Smith, Norman McCaig, Robert Garioch, Sorley MacLean, George Mackay Brown, and Edwin Morgan. To some degree, all these poets are McDiarmid’s followers.

Poets’ Pub is a big busy painting that draws your eye to the figures, each competing for your attention. In an interview with BBC’s Janice Forsyth, poet Stuart Patterson focuses on the poet’s eyes as Sandy Moffat painted.

“Even in pastel, charcoal, their eyes speak differently,” Patterson said.

The Landmarks: Poets, Portraits, and Landscapes of Modern Scotland exhibition owes much of its success to Ruth Nicol. In 1981, the Third Eye Centre in Glasgow held an exhibition, Seven Poets, which featured Alexander Moffat’s original portraits of the seven poets. This exhibition may have inspired 2018’s Landmarks exhibition because it also included photos, interviews with the poets, and texts of the written poems.

Ruth Nicol teamed up with Alexander Moffat and Alan Riach for the iconic Scotland’s Landmarks exhibition in 2018.

Born in 1967, Ruth Nicol is a Scottish landscape painter. She held an exhibition of her Three Rivers Meet paintings at Open Eye Gallery in 2014. In preparation for her exhibition, Ruth studied Moffat’s Poets’ Pub in detail. Once she completed Three Rivers Meet, Ruth worked hard to ensure Landmarks happened.

She embarked on a journey around Scotland, tracking down and painting all seven poets’ landscapes, settings, and hometowns. The Landmarks exhibition shows her talent, originality, and ambition to honor and pay homage to the seven poets.

Nicol’s landscapes breathe new life into Moffat’s portraits. Yet, they also show how much has changed and remained the same in four decades. Better yet, her landscape paintings give context to the seven poets’ verses by showing us the settings that probably inspired these poets.

Besides the outstanding portraits and landscapes by Moffat and Nicol, the exhibition walls had Alan Riach’s extraordinary story of his meetings with the poets. His encounters with the poets began when Alan was only a young student, and most of the poets were mid-career. Alan’s accounts and poems then extend to the days of his professorship in Scottish literature when the poets were in their old age.

Set in 1959, Moffat’s Scotland’s Voices is a striking piece where legends of Scottish folklore come to life. It includes musicians, singers, recorders, archivists, and thinkers committed to the folk tradition. In this painting, Hamish Henderson is surrounded by notable figures such as Jeannie Robertson, Willie Scotte, Belle Stewart, Aly Bain, and Allan MacDonald, among others. Henderson is a noteworthy figure among those responsible for the revival of Scottish folklore.

Union of the visual arts and oral arts

Through the Landmarks exhibition, Moffat, Nicol, and Alan demonstrated the marriage of visual and oral arts. It only seems natural that influential figures in literary arts should be celebrated in such an iconic way.