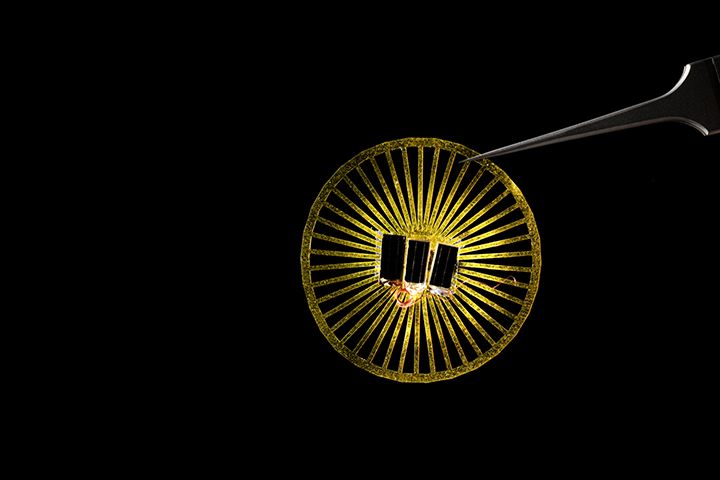 The common dandelion is one of the most recognizable and widely-known species that uses wind dispersal. The wind is an accessible and practical dispersal strategy for many plants, and dandelion seeds can disperse up to 100 km away. That’s why University of Washington researchers based their tiny battery-free sensors on the same wind propagation principle.

The researchers have developed tiny battery-free sensors that can monitor how temperature, light, air pressure, and other environmental factors vary across giant habitats or farms.

Taking inspiration from dandelions, the Washington team of researchers developed small sensor-carrying devices that the wind can disperse as they fall to the ground. These tiny sensors don’t precisely resemble a common dandelion, but they are based on the same idea.

The innovative battery-free circular device is solar-powered. The developers opted for solar power instead of batteries to reduce weight. The sensors can fly for about 100 meters on a breeze after being released from a drone.

This new device is shaped like a tiny flat wheel with several spokes projecting from the center. First, they had to add a ring outside the spokes to prevent them from crashing inward.

Co-author Vikram Iyer, a UW assistant professor in the Allen school, said: “The way dandelion seed structure works is that they have a central point and these little bristles sticking out to slow down their fall. We took a 2D projection of that to create the base design for our structures. As we added weight, our bristles started to bend inwards. So we added a ring structure to make it stiff and take up more area to help it slow down.”

First, the researchers had to design an ideal shape for wind dispersal. Next, they developed 75 prototypes before settling on the ring-shaped sensor with spokes. These devices can share sensor data up to 60 meters away. Details of the new tech were published in March 2022 in Nature.

Habitats have microclimates that change with seasons, changes in greenhouse gasses, and migration patterns of animals. Scientists plan to use thousands of these tiny wheel-shaped sensors to monitor environmental data, temperature fluctuations, light, and humidity, among other metrics.

Currently, it’s possible to set up wireless devices to transmit environmental metrics. However, it takes a lot of time to physically install hundreds or thousands of these devices across an entire habitat. And sometimes, some areas are inaccessible to humans.

That’s where these tiny sensors come in handy. Researchers can disperse hundreds of these sensors in a biome without disturbing animals or the landscape. As a result, it may be a discreet way to study a large area with little workforce and faster results.

During their experiment, 95 percent of the sensors landed with their solar panels facing upward. The device’s wheel-shaped structure allows it to flip in the air, eventually landing facing upward — just like the feathery dandelion seed. Another significant benefit of a battery-free device is that it won’t shut down unless it physically breaks down.

Disadvantages of the tiny wind-dispersed sensors

These new devices are prototypes, not the end product. Therefore, this innovative technology needs improvements to make the finished product more sustainable.

First, there is the risk of the materials used. Since they are to be used in farm and forest habitats, animals and insects may mistake them for seeds. And if animals ingest several devices, they could be harmful to wildlife.

Also, the devices are currently non-biodegradable. These sensors may be tiny, but thousands of them would create litter. In addition, as they break down, the non-biodegradable plastics could ultimately be ingested as microplastics.

Lastly, without a battery, there’s no backup charge, meaning the sensors shut down when the sun sets. When the sun rises the next day, the devices will need a bit of energy to reboot. To solve this, the team designed the machine to carry a capacitor that can hold some charge overnight.

The future of environmental conservation

Tracking temperature, humidity, light, and air pressure fluctuations are instrumental in environmental research. These factors begin a chain effect that influences all life on Earth. Yet today, scientists’ ability to study some habitats is limited by technology and their ability to set up remote sensors and collect data.

These tiny circular solar-powered devices may be prototypes, but they present a novel way to track environmental changes.

“This is just the first step, which is why it’s so exciting,” Lyer said. “There are so many other directions we can take now — such as developing larger-scale deployments, creating devices that can change shape as they fall, or even adding some more mobility so that the devices can move around once they are on the ground to get closer to an area we are curious about.”