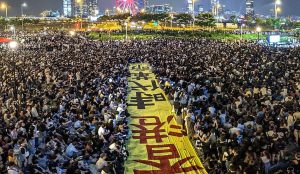 Canadian companies in Hong Kong are worried about their future due to the protests and clashes. (Image: Studio Incendo via flickr CC BY 2.0 )

The Chinese government bullies its citizens to submit to communist ideologies. Beijing seems to be exporting the attitude overseas, especially to Canada where Chinese ethnic people are now being harassed for having a mind of their own.

There are about 2 million people of Chinese origin in Canada. While they have been living in peace for much of the past few decades, things are not so easy right now. The increasing influence of Beijing is making every single Chinese-Canadian afraid of voicing their opinion on the wrongs committed by the Communist Party in their homeland. If they criticize the Chinese government in any way, their family members back home could be harassed or arrested.

To make matters worse, these Chinese-Canadians are fearful that pointing fingers at China might trigger racism against them. “Definitely, people are afraid to speak out… But it is a dilemma. People are also afraid of backlash, that Canadians in the mainstream will think all Chinese Canadians are involved in infiltration, or are working for Beijing, and will be suspect,” Ivy Li of the Canadian Friends of Hong Kong said to the National Post.

People belonging to persecuted communities like the Uyghurs, Tibetans, and Falun Gong practitioners are specifically targeted by communist goons if they speak against the Chinese regime. Beijing’s United Front Works Department has infiltrated and controls hundreds of Chinese business and community organizations in Canada. Chinese language media in the country is largely under the control of wealthy businessmen who are allied to the Communist Party. Only a few like The Epoch Times, NTDTV, and our own media, Nspirement, dare to expose the realities happening in China and Chinese communities abroad.

Even in universities, the Chinese government has extended its influence and oversight. The activities of almost 80,000 Chinese student visa holders are constantly monitored to ensure that they do not criticize the state. Any “anti-Beijing” activity in Canadian universities is immediately neutralized through threats or coercion. In August, the Simon Fraser University in British Columbia was subjected to bullying by pro-China influences.

A wall that was posted with messages in support of the Hong Kong protests was vandalized. A Mandarin-speaking man had calmly torn down the messages even though someone pleaded with him to stop. The perpetrator went on to say on camera to call security since he is not scared. The university’s student body passed a resolution condemning the attack. “[The society] stands firmly in support of the right of all Simon Fraser University students to peacefully, respectfully and freely express their views regarding the ongoing political situation in Hong Kong,” the resolution stated (South China Morning Post).

Unrest in Hong Kong has shaken the confidence of Canadian businesses operating in the city. They are afraid of the increasing possibility that the Chinese government might eventually take complete control of Hong Kong, thereby essentially killing the city’s liberal business environment. Ottawa has asked the 300,000 Canadians living in the region to exercise a “high degree of caution”.

“I underestimated the level to which this could reach with the unrest there… It’s important to be really in tune with the tea leaves… and to make sure that you’re not underestimating the risks in low-risk jurisdictions because they can happen,” Paul Doucet, security director for Canada at International SOS, a travel security firm, said to Global News.

Some of the Canadian businesses have suspended corporate travel to Hong Kong. Companies are also seeking help in protecting their employees from the consequences of the unrest due to legal obligations.