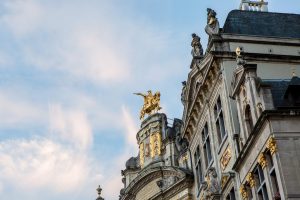 What do a medieval phrase and the La Grand-Place have in common?

“All roads lead to Rome,” and six narrow side alleys lead to the cobblestone square in the heart of Belgium’s capital, which, including all of its magnificent beauty, has been etched into my memory.

La Grand-Place’s earliest written reference goes back to the 12th century. It’s surrounded by guild houses. In the Middle Ages, each profession had its own guild. La Grand-Place is now a UNESCO World Heritage site.

If it’s not by the natural urban stream of pedestrians vitally flowing through the streets of Brussels toward its steady pounding heart, which naturally leads you to the old marketplace — today known as la Grand-Place — then it is the magnificent town hall tower that will call you toward it, like a siren singing its enchanting music to sailors at sea.

Once inside the square, I am surrounded by majestic buildings lined up on each side, from corner to corner. Cups clinking as their bottoms meet the saucers. People watching people, sitting in the dreamy cafés in front of the antique guild halls — most of which were erected between 1697 and 1705. While opposed by La Grand-Place’s ancient-looking structures, the smell of fresh waffles in the air makes me feel comfortable.

The exteriors of most guildhall houses are masterfully decorated with baroque gables, heightened with gold, reminiscent of the status and wealth once prominent to their occupants.

Anyone who appreciates the eclectic blend of architectural styles will be amazed by how harmonious the Brabant Gothic of City Hall (the Hotel de Villle), the King’s House, or the Broodhuis (Dutch:”Bread house”) staring right back from across the market, blend in with one another.

The same goes for the Maison des Brasseurs, also known as the “Golden Tree,” with it’s Baroque frontage and hop plants that artfully wind their way up the pillars of the building. It is the guildhall headquarters for the brewers of Brussels, and shoulders to its right with the Maison des Ducs de Brabant (Dutch: “House of the Dukes of Brabant”), which gets its name from the aristocratic sculptures decorating its front.

The Maison des Ducs Brabant is home to seven of La Grand-Place’s guildhalls, being the headquarters of the old millers, tanners, carpenters, woodworkers, and the stonemasons.

Most of La Grand-Place was burned to ashes and destroyed during the bombardment of the city in 1695 by French troops. Thanks to the merchants — whose emblems of professions decorate the respective guild houses around the medieval market in the center of Brussels — the market buildings were rebuilt in the way they stand today.

The scene is just breathtaking and too amazing to be captured by words, thoughts, or imagery. One has to be there to truly experience La Grand-Place with all of its beauty, the people passing by, the different aromas that fill the air, and the sounds that enhance the experience.

Would I go there again? Yes, I would. There is just too much to take in during one visit. Isn’t it so, that after finishing a tasty dish, just the memory of it evokes in you the longing to try it once more? And this too is how I feel about La Grand-Place. 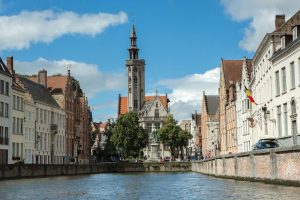 There is a dreamy town in Belgium known not only as the capital of West Flanders, but also as the 'Venice of the North.' (Photo: Hermann Rohr for Nspirement)