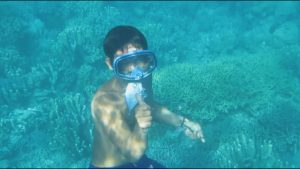 The evidence suggests that the Bajau, a people group indigenous to parts of Indonesia, have genetically enlarged spleens that enable them to free dive to depths of up to 70 m. (Image: via Melissa Ilardo)

Evidence that humans can genetically adapt to diving has been identified for the first time in a new study. The evidence suggests that the Bajau, a people group indigenous to parts of Indonesia, have genetically enlarged spleens that enable them to free dive to depths of up to 70 m.

It has previously been hypothesized that the spleen plays an important role in enabling humans to free dive for prolonged periods, but the relationship between spleen size and free diving capacity has never before been examined in humans at the genetic level.

The findings, which are published in the research journal Cell, could also have medical implications in relation to the condition known as acute hypoxia, which can cause complications in emergency medical care.

For over 1,000 years, the Bajau people, known as “Sea Nomads,” have traveled the Southeast Asian seas in houseboats and collected food by free diving with spears.

Now settled around the islands of Indonesia, they are renowned throughout the region for their extraordinary breath-holding abilities. Members of the Bajau can dive up to 70 m with nothing more than a set of weights and a pair of wooden goggles.

As they never dive competitively, it is uncertain exactly how long the Bajau can remain underwater, but one of them told researcher Melissa Ilardo that he had once dived for 13 minutes consecutively.

Ilardo, first author on the paper, suspected that the Bajau could have genetically adapted spleens as a result of their marine hunter-gatherer lifestyle, based on findings in other mammals, saying:

“There’s not a lot of information out there about human spleens in terms of physiology and genetics, but we know that deep diving seals, like the Weddell seal, have disproportionately large spleens.

“I thought that if selection acted on the seals to give them larger spleens, it could potentially do the same in humans.”

The spleen plays a central role in prolonging free diving time, as it forms part of what is known as the human dive response. When the human body is submerged under cold water, even for brief amounts of time, this response is triggered as a method of assisting the body to survive in an oxygen-deprived environment.

The heart rate slows down, blood vessels in the extremities shrink to preserve blood for vital organs, and the spleen contracts.

Enlarged spleens in free diving individuals give them boost of oxygen

This contraction of the spleen creates an oxygen boost by ejecting oxygenated red blood cells into circulation and has been found to provide up to a 9 percent increase in oxygen, thereby prolonging dive time.

In order to gain evidence for this study, Melissa Ilardo spent several months in Jaya Bakti, Indonesia taking genetic samples and performing ultrasound scans of the spleens from both the Bajau and their land-dwelling neighbours, the Saluan.

The results were sequenced at the University of Copenhagen and clearly showed the Bajau have a median spleen size 50 percent larger than the Saluan. Enlarged spleens were also visible in non-diving Bajau individuals, as well as those who are regularly free diving.

The international research team, led by academics from the Universities of Copenhagen, Cambridge, and Berkeley, therefore eliminated the possibility that larger spleens were simply a plastic response to diving and began to investigate the Bajau’s genetic data.

They discovered that members of the Bajau have a gene called PDE10A that the Saluan do not. It is thought that the PDE10A gene controls the levels of thyroid hormone T4, Ilardo explained:

“We believe that in the Bajau, they have an adaptation that increases thyroid hormone levels and therefore increases their spleen size.

“It’s been shown in mice that thyroid hormones and spleen size are connected. If you genetically alter mice to have an absence of the thyroid hormone T4, their spleen size is drastically reduced, but this effect is actually reversible with an injection of T4.”

This is the first time a genetic adaptation to diving has been tracked in humans. Ilardo added:

“Until now, it has been entirely unknown whether Sea Nomad populations genetically adapt to their extreme lifestyle.

“The only trait previously studied is the superior underwater vision of Thai Sea Nomad children; however, this was shown to be a plastic response to training, and was replicable in a European cohort.”

“We told Melissa that this was a very risky Ph.D. and she needed to be aware that it was likely she would find nothing.

“She said she wanted to do it anyway and that paid off. Melissa was right and our concerns were wrong.”

The study also has implications for the world of medical research. The human dive response simulates the conditions of acute hypoxia in which body tissue experiences a rapid depletion of oxygen.

It is a leading cause for complications in emergency care and, as a result, is already the subject of several genetics studies, specifically in relation to people groups who live at high altitudes.

Studying marine dwellers such as the Bajau has great potential for researching acute hypoxia in a new way, Dr. Nielsen said:

“This is the first time that we really have a system like that in humans to study.

“It will help us make the link between the genetics and the physiological response to acute hypoxia. It’s a hypoxia experiment that nature has made for us and allows us to study humans in a way that we can’t in a laboratory.”

These findings open up the possibility of further research on other Sea Nomad populations, such as the Thai Moken population and the Haenyeo diving women of Jeju in South Korea.

Taking the next steps in this area of research is a somewhat urgent task, as the traditional ways of life are under threat in a lot of communities. Professor Willerslev added:

“This study is a wonderful example of the value of studying these small populations living under extreme conditions.

“A lot of them are threatened and this is not just a loss culturally and linguistically, but for genetics, medicine, and sciences in general. There’s still a lot of information to be gathered from these understudied populations.”