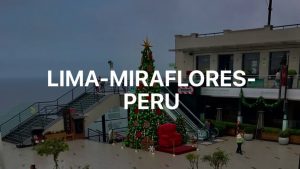 My wife, a Peruvian herself from Lima, suggested I visit Miraflores for a few hours and so I did. (Image: Hermann Rohr / Nspirement)

It was the end of my 10-day Peru trip and I had 6 hours of spare time before my connecting flight to Germany. What to do, I thought? Lima airport has only so much to offer and I had eaten at or drunk at every hip or inviting spot at the airport. My wife, a Peruvian herself from Lima, suggested I visit Miraflores for a few hours and so I did. I hopped on the shuttle bus at the airport and off I was.

The first part of the bus route went through Lima’s outskirts of the city, alongside a highway and what looked like an industrial area. Then after 15 minutes or so, we came to a part of the road that followed the ocean shore.

I can just imagine how surfers feel, who are lucky enough to surf at some of Peru’s most acclaimed surfing spots. Finally, after about 40 minutes, the air-conditioned bus entered the streets of what looked like a skyrise oasis built at the shore of a beautiful coastal landscape, Miraflores.

Miraflores is a district of Lima Province in Peru. It is an exclusive residential and upscale shopping district, located south of downtown Lima. It is also one of the most affluent districts that are part of the city of Lima.

I figured I would use the time I had, which was just a few hours, to catch up on something I had neglected during my trip — souvenirs. But where to go? According to the locals, if I was looking for some good but not too expensive souvenirs, the Inka Market was the right place to visit. And so I did. I found some real goodies there indeed for my wife, my son, and even a co-worker, who I had promised to bring back some tea from Peru.

A few hours later, packed with souvenirs and a good time spent, I was off to the airport. I was told by locals, airport-staff, and my dear wife that Lima traffic is nothing to mess with and that if I wanted to make it back to the airport in time I had to head back before the traffic started getting congested. Lucky for me, Cronos and Fortuna both seemed to fare me well and I made it back safe, well, and in time to catch my flight after I had another irresistible Peruvian meal at a restaurant in the airport just beside my gate of departure.

If you ever have the time like I did, or are passing through Lima, I highly recommend you put Miraflores on your bucket list.