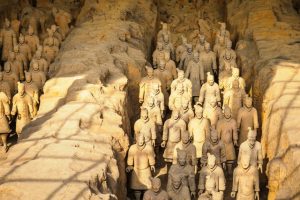 A massive Chinese excavation under the Minjiang River close to Chengdu, Sichuan Province, has led to the discovery of a vast treasure. About 30,000 artifacts and relics have been found that are at least 300 years old.

The archaeological survey and the process of unearthing the items began in January 2017. It is believed that this treasure belonged to Zhang Xianzhong, who was the leader of a peasants’ revolution during the later years of the Ming Dynasty.

Even before the discovery, the local area abounded with plenty of tales and legends about the Chinese leader and his treasures.

Zhang Xianzhong was known to be a rebel who had his own army of notorious marauders and eventually took over Sichuan Province. He was a striking person famous for the title “Yellow Tiger” because of his notable jawline and sharp yellow complexion.

According to one account, with the onslaught of the Qing Dynasty to capture Sichuan, Zhang decided to leave Sichuan Province along with all the treasures he had amassed during his multiple raids. However, the Qing forces reached Zhang’s army and defeated him.

According to another story, Zhang’s fleet was ambushed and defeated on the Minjiang River by a Ming General, Yang Zhan. It is said that Yang Zhan set Zhang’s entire fleet on fire and more than a thousand ships sank in the river, and along with them, all the vast treasure.

However, the numerous relics discovered suggest that Zhang was a ruthless leader, as many of the artifacts are believed to have belonged to common folks. Therefore, the find suggests that Zhang accumulated his wealth by looting both the rich and the poor.

The large treasure discovered included gold, silver, and bronze artifacts, such as jewelry, coins, hair pins, brooches, utensils, and accessories, as well as iron weapons, especially swords, and even a blunderbuss.

According to China Daily, this is the first time a blunderbuss, a primitive version of a firearm, has been found, which is significant not just for Chinese history, but also for the history of arms and weaponry in general.

Many of the items found have indications of Zhang’s Daxi Kingdom, which is another sign that the treasure truly belonged to him.

It’s not the first time this treasure has been found

The neighboring town of Jiangkou has already seen many of these ancient silver and gold coins as workers discovered them in 2005 at a site for a water diversion project and then again, in 2011, at a sand collection site for construction.

Later on, police officials also found that certain people had been conducting illegal excavations of the area on their own to find the treasures. As a result, many of the accused were detained by the police in 2015 and a large number of coins was confiscated.

However, there is a plus side to the illegal excavations, as the whole incident highlighted the existence of such a treasure in the area. Consequently, the government and various archaeological institutes took a keen interest and have made some significant discoveries.

According to Li Boqian, an archaeologist at Peking University: “The items are extremely valuable to science, history, and art.” The find has also given great insights into the history of the Ming Dynasty, as well as Zhang Xianzhong’s notorious reign.