The Greta Thunberg of China, Howey Ou, Raises Her Voice for Environmental Awareness 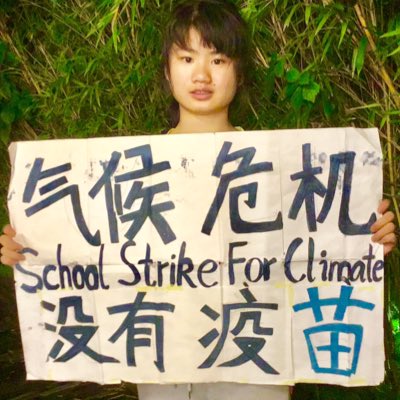 In many countries, climate change activists have taken to the streets, bringing their governments to task, but in China, one figure seems to be fighting alone. Howey Ou says it’s her “life mission” to spark change before it’s too late.

“The climate emergency is the biggest threat to the survival of mankind,” Howey Ou told The Japan Times last year. “I feel anxious every day about the climate and the extinction of animal species. I feel like we’re all on a sinking ship but everyone is still eating, drinking, and being merry.”

Howey Ou, who is the same age as the Swedish climate activist Greta Thunberg, said she was inspired by her protests and decided to fight for environmental change in China, her home, and the world’s biggest polluter.

However, it has not been an easy battle.

Her environmental awakening began when she was a little girl growing up in Guilin, a small southern Chinese city famed for its lush green mountains, freshwater rivers, and dramatic limestone peaks. Nature and a love for animals shaped Howey Ou’s values and beliefs, and these would later inspire her to set off on a life-changing mission.

In May 2019, Howey Ou launched China’s first climate strike, standing in front of government offices in Guilin for several days — an action that led Thunberg to call her a “true hero”. But unlike Thunberg, who has gone on to achieve global status and recognition, Howey Ou is fast discovering that her brand of green activism isn’t well-received at home in China, where public criticism and dissent are viewed as official acts of defiance — and harshly punished.

Authorities soon intervened and told Howey Ou that she had to move on — owing to the fact she didn’t have a permit. Her school said she would not be able to return to her studies. When her parents petitioned the school to have Howey Ou readmitted, they were told by authorities that she must cease doing interviews with the international press. Her school also said she would have to take a psychological test if she were ever to be readmitted.

Her school eventually re-admitted Howey Ou, but she decided not to return, stating: “After learning how urgent the problem of climate change is, I can barely afford to continue any high school courses anymore. To address this crisis, we have to create a nonviolent disobedience campaign, and use the power of social science to let more people know the urgency of this problem.”

Although Howey Ou believes there is still a lack of urgency worldwide when it comes to climate change, she does see hope — even in her home country, where she initially met with resistance. Awareness is increasing, and Howey Ou says that in a short matter of years, she has seen more students her age form clubs dedicated to climate change awareness in dozens of cities all over the country.

Howey Ou has built a Twitter and Instagram following of thousands and gained international media coverage; however, her journey in China has been far from smooth.

She recently opened a new account on China’s microblogging platform Weibo after initially being banned, though it has struggled to amass a following. And although she was portrayed in a positive light by the Chinese state media publication The Paper, discussions around her story on Chinese social media have been on the whole negative.

Given the impact that inaction on climate change will have on young people’s lives, Howey Ou still feels like helping more of her peers understand the urgency of the situation is key.

Writing on Twitter, Howey Ou referenced an old Chinese saying: “天下兴亡，匹夫有责, teach me to take a stand when the world is in a crisis, let alone (climate change) is the biggest crisis in human history. I can’t imagine China to (be) absent in this battle, even fear to see it as blank. If no one is really (doing) anything, then I have to.”